Katie Bishop is back with another recipe to make your mouth water – this month – it’s spiced oat cookies. Yum!

They’re super easy to make – why not involve the children during the school holidays?

Watch a video of Katie making these cookies and ‘scooting’!

In the meantime, you can find out more about her at https://katiebishop.co.uk or follow her on Instagram at @ktbishopcooks

Katie Bishop is back with another recipe to make your mouth water – easy fish pie.

As this recipe says – it’s super easy, as well tasty and nourishing.

This is great for a family meal or entertaining a group – what’s also brilliant is that you can make it ahead of time too. 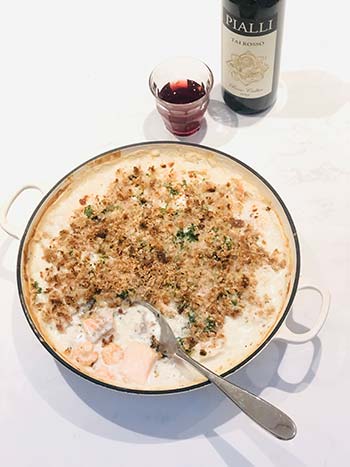 If you’re a fan of peas, add a few handfuls of frozen or fresh peas to the mixture at the same time as the fish.

If you want to make this ahead, just make the fish layer, then cool, cover and chill for up to 24 hours, then when ready to eat, reheat gently and add the crumbs at the last minute and continue as above.

This recipe is fantastic, as Katie has thought this would be a great recipe to make, after having seen the conversation with Jo and Dr Sophie Bostock  on sleep ….

Now, I am not a nutritionist, but there is anecdotal evidence to suggest that eating turkey can help you sleep!

According to healthline.com ‘Turkey has a few properties that explain why some people become tired after eating it, or think it encourages sleepiness. Most notably, it contains the amino acid tryptophan, which increases the production of melatonin.’

The protein in turkey may also contribute to its ability to promote tiredness.

There’s evidence that consuming moderate amounts of protein before bed is associated with better sleep quality, including less waking up throughout the night.

Although it is clear that more research is necessary to confirm turkey’s potential role in improving sleep. 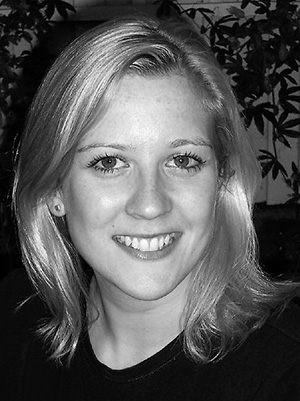 I’ve heard that almonds, walnuts, dairy and bananas are also thought to be helpful when it comes to dropping off … but as I say, I’m not a nutritionist. All I know is they’re all really tasty and are great as part of a balanced diet, so if they help sleep too, then that’s just a bonus!

These meatballs are really quick and easy to make, so they’re perfect for a meal during the week.

They also contain lots of ‘hidden’ vegetables and so they are great for increasing your daily quota, or to help when it comes to feeding children who don’t overly enjoy eating them!

You can freeze these meatballs along with the sauce (either together or separately) so they’re always ready to use for a quick midweek meal. Simply defrost in the fridge overnight, and of course – always be sure to heat them thoroughly before seaving. 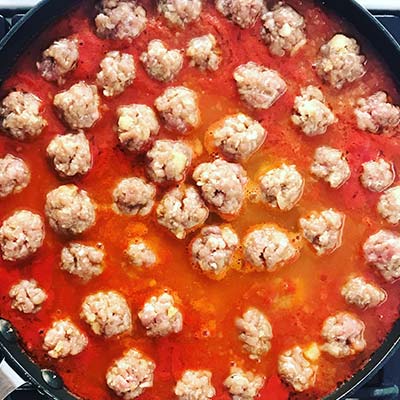 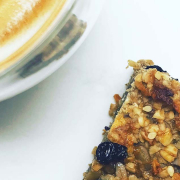 Katie won the Young Cook of Britain competition at the tender age of 14!  She travelled the world working as a chef and cemented her dream of becoming a professional food writer.

“It is not uncommon for me to be thinking about what I’m going to eat for supper while I’m still eating my lunch.”

She has now been a freelance food writer, editor, stylist and consultant for 20 years.  She works with magazines and publishers, writing books and editorial features, as well as making food look beautiful for photos. She also works in advertising and film, presents cookery demonstrations and appears on TV and radio.

We’re incredibly fortunate to have her contribute to our lifestyle magazine here at jotuffrey.com

Today – she introduces us to Banana, apple & honey flapjacks …

If you’re trying to sneak some extra fruit in to your diet (or that of your children) without feeling too hard done by, then this recipe is for you. It’s an extremely easy and quick bake that will satisfy sweet cravings, without any added sugar – just honey. They’re flour-free too!

The banana and apple elements increase your fruit intake, whilst helping to bring the mixture together. The benefit being that you don’t need so much butter or sugar.

Feel free to mix it up a little – use what you can find in the cupboard! Dried apricots, cherries, cranberries, raisins or mixed dried fruit all work well. Poppy seeds are always a good addition to bakes and some chia would taste good too.

Katie says that you can use over-ripe bananas and apples – there’s nothing worse than food waste – this will help keep it down.

It’s good to experiment – try adding some finely grated orange or lemon zest to the mixture, before baking.

You can of course turn this into something slightly less healthy – by drizzling melted chocolate (white, milk or dark) over the top – we’ll let you decide on that.

So – let’s take a look at how to get these done! 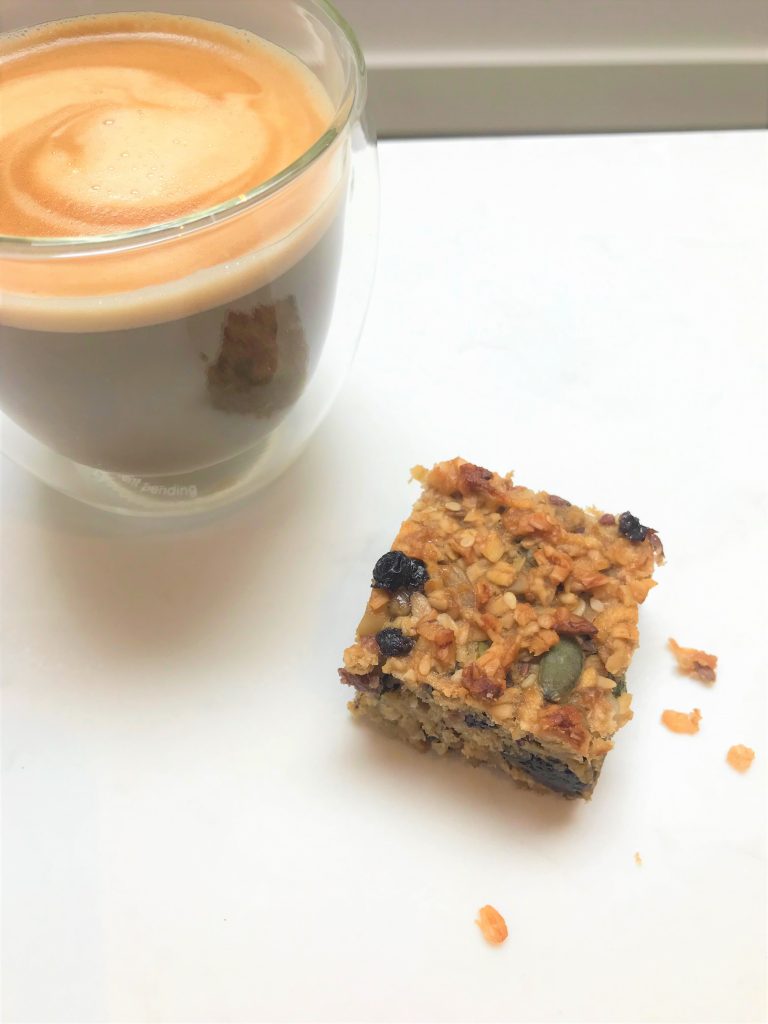 Jo loves coffee – you’ll hear her talking about it during her workouts regularly.

Recently, she was approached by Alex Higham, the founder of Exhale Coffee. Alex is an expert in the chemical composition of coffee and has conducted all kinds of experiments with labs to test the various properties of his coffee blend as well as others.

Imagine a coffee with health benefits in the same league as fresh fruit and vegetables? Well that’s what Alex and his team have been researching and developing for the last 2 years and Jo wanted to find out more.

She spent some time on Zoom with Alex recently and we’ve put together this amazing interview. If you think you know about the properties of coffee and how important it is in our lives – then think again!

As a taster, did you know that 1 cup of exhale coffee has the same antioxidant power as 12 punnets of blueberries, 55 oranges or 1.2kg of kale!

Find out more in this interview between Jo and Alex …

The health benefits of drinking coffee

Alex Higham: Coffee is a fruit – coffee grows on trees and coffee starts its life as a cherry  So a coffee bean, isn’t a bean at all  It’s a seed. So coffee is a fruit!

Alex Higham:  It’s seen as this lifeless brown bean that makes this kind of black coffee, but all I’m trying to say is, look, coffee is a fruit  – coffee comes from fruit!

Jo Tuffrey:  Introduce yourself and say who you are ….!

Alex Higham:  Yes, I’m Alex. The company is called Exhale Coffee and we launched around six months ago in lockdown after a good two or three years of researching, developing and building the idea for the business  It’s been a long journey, but basically over the last few years, I have been reading more and more about the science around coffee.

More and more, the studies are pointing towards coffee as being a superfood with lots of different health benefits. So it’s potentially been associated with the reduced risk of all sorts of different diseases.

Coffee is one of the most drunk beverages in the world. It’s also one of the most studied. In the last 10 years, there has been over 8,000 studies on coffee  and its implications on health alone. Because it’s so wildly drunk, people are really interested in how it affects your health.

Jo Tuffrey:  So what are the benefits then of drinking coffee?

Alex Higham:  There’s been all of these studies over many decades. The studies have moved from observational studies, where they look for associations between drinking coffee and different diseases, and  looking at the kinds of mechanisms of the action of drinking coffee could be having in the body, which could be causing these benefits.

How often should you have a cup of coffee?

Jo Tuffrey: Would you advocate drinking your coffee all through the day or whenever suits the person?

Alex Higham:  I would advocate drinking coffee all day long, right up until bedtime, but to choose a decaf after a certain time of the day. And it depends on your own personal gene …

I’m actually a really slow caffeine metabolizer. So if I have a coffee after about lunchtime, I can’t sleep at night, whereas other people can. The fast metabolizers of caffeine can have a coffee just before bed and they’ll burn off the caffeine and then they’ll sleep.

However, decaf really does have a lot of benefits as well. So  in the afternoon I switched to decaf and then recently have started having a decaf before bed because there’s a whole load of benefits around fasting.

Does coffee help with pilates and fitness?

Alex Higham: Oh, definitely. I mean, caffeine in particular is one of  the few proven ergogenic cases for sport.

Up until the early nineties, coffee was banned by the world anti-doping association, but then it made it legal more recently. The studies show that if you drink quite a lot of coffee, (between three and six milligrams of caffeine per kilo of body weight), which is probably about the equivalent of two double espressos – that’s where you would get the real benefit.

Jo Tuffrey: I don’t think my clients would allow me to have that!

Alex Higham: No, exactly. But if they do there’s two separate meta analyses, which show that caffeine increases exercise performance by 11 to 12% on average.

How do you make the ultimate cup of coffee?

Jo Tuffrey:  Now I’ve heard that you shouldn’t pour boiling water onto coffee. Should you do that or not?

Alex Higham: No! So if you add boiling water to the coffee it can scold the beans and it can over extract some of the bitter flavour compounds in the coffee.

So the advice we give is to boil the kettle …  leave it 30 seconds off the boil and then pour it!

However – you don’t want to let it cool too much because the extraction of all of the compounds and the healthy compounds, the good stuff from coffee is a chemical reaction. Chemical reactions are all sped up by hotter temperatures. It’s standard law of chemistry. The hotter, the temperature during the reaction, the faster it will take place.

If you let the water cool too much, then it’s not going to be hot enough to extract the healthy compounds. So you want to let it cool just off the boil, but not too much.

Find out more about Exhale Coffee